Typical fuses consist of an element which is surrounded by a filler and enclosed by the fuse body. The element is welded or soldered to the fuse contacts (blades or ferrules). The element is a calibrated conductor. Its configuration, its mass, and the materials employed are selected to achieve the desired electrical and thermal characteristics. The element provides the current path through the fuse. It generates heat at a rate that is dependent upon its resistance and the load current. 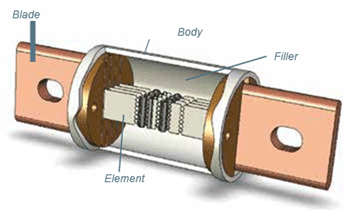 The heat generated by the element is absorbed by the filler and passed through the fuse body to the surrounding air. A filler such as quartz sand provides effective heat transfer and allows for the small element cross-section typical in modern fuses. The effective heat transfer allows the fuse to carry harmless overloads. The small element cross section melts quickly under short circuit conditions.  The filler also aids fuse performance by absorbing arc energy when the fuse clears an overload or short circuit. When a sustained overload occurs, the element will generate heat at a faster rate than the heat can be passed to the filler. If the overload persists, the element will reach its melting point and open. Increasing the applied current will heat the element faster and cause the fuse to open sooner. Thus, fuses have an inverse time current characteristic, i.e. the greater the overcurrent the less time required for the fuse to open the circuit.

This characteristic is desirable because it parallels the characteristics of conductors, motors, transformers and other electrical apparatus. These components can carry low level overloads for relatively long times without damage. However, under high current conditions damage can occur quickly. Because of its inverse time current characteristic, a properly applied fuse can provide effective protection over a broad current range, from low level overloads to high level short circuits. 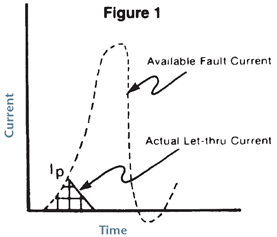 Current limitation is one of the important benefits provided by modern fuses. Current-limiting fuses are capable of isolating a faulted circuit before the fault current has sufficient time to reach its maximum value. This current-limiting action provides several benefits:

It limits thermal and mechanical stresses created by the fault currents.

It reduces the magnitude and duration of the system voltage drop caused by fault currents.

Current-limiting fuses can be precisely and easily coordinated under even short circuit conditions to minimize unnecessary service interruption.

Peak let-thru current (Ip) and I2t are two measures of the degree of current limitation provided by a fuse. Maximum allowable Ip and I2t values are specified in UL standards for all UL listed current-limiting fuses and are available on all semiconductor fuses. 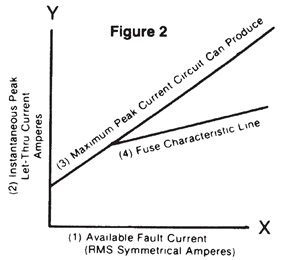 Let-thru current is that current passed by a fuse while the fuse is interrupting a fault within the fuse’s current-limiting range. Figure 1 illustrates this. Let­ thru current is expressed as a peak instantaneous value (Ip).

Ip data is generally presented in the form of a graph.

(2) The Y-axis is labeled as ” Instantaneous Peak Let-Thru Current ” in amperes.

(3) The line labeled “Maximum Peak Current Circuit Can Produce” gives the worst case peak current possible with no fuse in the circuit.

(4) The fuse characteristic line is a plot of the peak let thru currents which are passed by a given fuse at various available fault currents.